With Yellow Field, there was never any school of writing. Though a friend kept reminding me: there’s still a program!—what was it?

The magazine called itself a venue for “the established, the emergent, the undersung,” collating together works of lyric (including anti-lyric), the musical, and the visual. Most often, the contributors were writers I hadn’t met, or knew just barely; furthermore, as a reviewer generously noted, Yellow Field was “NEVER a survey of the usual suspects” [Michael Cross].

Maybe it’s my stance as a Buffalonian—some common trait of working along with a “low current” of readership. That seems to fit. An old friend of mine from Syracuse, enamored with the Buffalo arts scene, once said of it: when all the State money dried up, and all the grants went away, most of the arts in other cities across New York gave up and died; but in Buffalo, they just kept going!

I’m always interested in artists who just keep going, maybe even without any notice… those undersung. This draws me—how, without venue, or with little readerships, some are just driven to. Certainly no prizes come into play! And I loved finding an old mag in a used bookshop, opening upon some poem that entranced, then reaching out to say hello & “what are you working on now?”

Each issue brought together a gallery of people mostly unknown to one another, often from different counties, and no clannishness seems to’ve emerged or pervaded. And that seems good to me. Sure, the presences start to spool; a certain list of works gets reviewed; a contributor is repeated… As luck would have it, the collator might even keep in touch with someone they’ve never spoken with face-to-face, in far-off Vancouver, who’s now the dearest friend.

I’m also most grateful here to rob mclennan for the chance to reach out again to people whose work I admire, ask if they’ve been alright this last year, see what they’ve been working on. 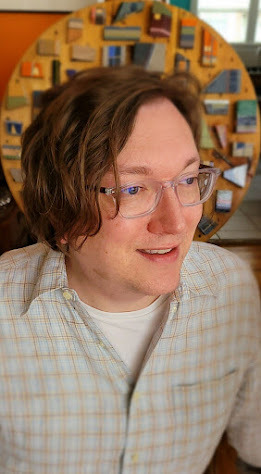 Edric Mesmer was collator of Yellow Field from Fall 2010 until right now. Recent poems and reviews have appeared in AMP, Blazing Stadium, No Materialism, and periodicities, and his book POEMS: now & then was published in 2020 by BlazeVOX. He now edits Among the Neighbors, a pamphlet series on little magazines published by the University at Buffalo’s Poetry Collection where he works as a cataloging librarian—To subscribe to the series, just send along an email!
at November 25, 2021