Sentimentally, part of what we wanted, early in the pandemic, sitting in the park together in last winter’s last bit of cold, was for some poets to meet us before it got too cold again. Just poets with practices—personal, artistic, and critical—that we admire. Now on the edge of a new year, it’s funny what that ask, big and loose, managed to render.

We thought maybe these poems might meet us where we’re at, but maybe they’re having us meet them where they are. The hope was that it would be on the other side of a time we would have begun to put behind us, but it was always a hope troubled by what that shift might change, and what it might not change at all.

“New,” Lindsay Miles writes, “is horizontal with old,” as the historical present becomes more quotidian. We have forgotten how to relate to one another, or to “the you of me,” as Ali Pinkney writes. Instead, we may find our interactions becoming limited to household objects. “Entire days where i frown at the pots,” Emma Sanders reminds us.

We’re told it will be a La Niña year, meaning colder and wetter, and it feels like decades old info. The future has been here a while. Now, an unbelievably lovely September week in November feels disturbing and obvious. Numbers and fires are still on the rise, and “fatigue” colours every other word like it was there all along. “Against the pretense of personal growth,” Steffanie Ling writes, “we throw ourselves into the wear of it.” We try to emerge, somehow, and we think these poems might help with that.

“There are so many hours left in the day,” Marcela Huerta warns, “not to fuck anything up.” So, we are at work with the inevitable. “What I need places me alone in the world,” she continues, “so I try very hard to stop needing.” We read the words over a couple of times, because how could we not. In this ever-renewing disaster, Bridgemohan and Brown insist, “This opportunity is still available,” and we read into it as far as we can. 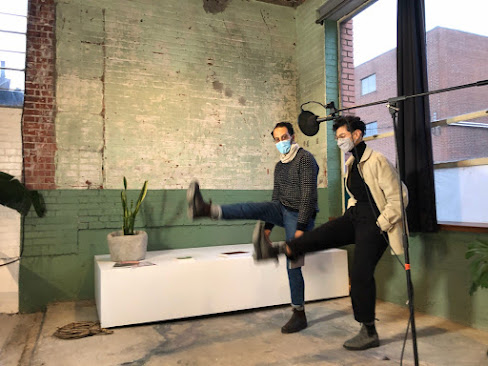 David Bradford is an interdisciplinary poet and a founding editor of House House Press. He holds an MFA from the University of Guelph and is the author of several chapbooks, including Nell Zink Is Damn Free (Blank Cheque Press, 2017), Call Out (knife | fork | book, 2017), and The Plot (House House Press, 2018). His poetry has appeared in Prairie Fire, Poetry Is Dead, Vallum, Carte Blanche, The Capilano Review, and elsewhere. Bradford’s first book, Dream of No One but Myself, is forthcoming from Brick Books. He lives in Tiohtià:ke (Montréal), on the unceded territory of the Kanien’kehá:ka Nation.

Anahita Jamali Rad was born in Iran and currently based in Tio’tia:ke on the traditional territory of the Kanien’kehá:ka. Informed by anti-imperialist materialist theory, Jamali Rad’s work explores materiality, history, affect, ideology, violence, class, collectivity, desire, place, and displacement. They have published many chapbooks, and one full-length book of poetry, for love and autonomy (Talonbooks 2016). With Danielle LaFrance, they co-edited the journal About a Bicycle, of which there were 5 issues.